Energy Healing — When the Soul Speaks, the Healers Listen

Energy healing treatments are the key to the “general spectrum” of diseases, starting from physical, mental, and emotional pains, to those most severe diseases that traditional medicine usually calls “incurable”. There are no incurable diseases; there are only incurable people!

What are energy healing treatments?

In short, this means that any disease can be cured if it is not “needed” by a person for many reasons. There are many cases where people subconsciously do not want to get rid of their disease, i.e., to heal. In those cases, the patients themselves are the most significant barrier to their own healing.

Another case in which there is no cure, but only an improvement of the condition, is when the disease is the way for the patient to leave this world. In other words, this is only the case if the soul had decided even earlier that in this way, through sickness, it would leave this world.

In such cases, only the pain and accompanying difficulties with such a disease can be alleviated, so that the person can more easily carry it to the end. For example, a person with late-stage cancer has great pain. Then the healer can make the person suffer much less, minimize pain, and keep the consciousness at a normal level.

For all other diseases and health difficulties, energy treatment is performed in a direct physical presence or on a distance. The client immediately feels sensations on the body, whether the healer is physically present or thousands of miles away. Sensations are most often manifested as tingling in the arms and legs, waves of energy passing over the body, and very often, people feel small pains where otherwise there is a disease. Some feel only comfort, relaxation, and mild drowsiness. Many people fall asleep during distance treatment, which is good because healing is the fastest and the most efficient during sleep.

Others see various colors with closed eyes, some have visions of unknown places and people, and some of the familiar places and people, but in a completely different way. Some feel their third eye-opening, widening, other an outburst of laughter, and some even cry. Reactions to treatments are very different depending on the character of the person, but also the nature of the disease.

The spectrum of physical illnesses is vast, so there’s no point in listing everything that can be healed. If you think that energy healing can do something for you, listen to your intuition first, and if you feel you need to do it, then get in touch with a healer. If you don’t feel it, it’s not the right time, and you’re not ready. Always listen only to your voice of intuition because it guides you to people who will help you heal.

Energy has the fastest effect on this type of illness, whether it is neurosis, psychosis, depression, anxiety, panic attacks, various phobias, etc.

These are all the heaviness that we have due to unresolved emotions and which, being long-term, are dragging us to the bottom and eventually producing specific physical illnesses. Here, too, energy treatments clean these types of difficulties very quickly and quite effectively.

Everything is OK at the doctor’s, but your body still hurts

Diseases of unknown origin for which the traditional medicine has no diagnosis puts them in the box of “incurable” because the cause is unknown. The difference between conventional medicine and the alternative is that we have ways to determine the real cause of the disease and thus diagnose and treat it. With a scanning system and inner sight and hearing, these causes can be identified and start to heal.

Marriages come with problems. We are all aware of that. People who go to energy healing to solve marriage problems usually tend to save the marriage because of the children, but the spouse is the primary source of the problem.

Energy healers do not have the right to heal anyone who has not given explicit permission to heal, and therefore healers cannot perform treatments on “husbands” or “wives”. The only thing that can be done without violating any moral rule and divine law is to do the “Treatment of the situation”.

In such cases, the higher selves of both spouses are encouraged to connect on a higher level. The situation is to be resolved only if it is for the Great Good of all persons involved in that situation and following the spiritual or karmic contract between those persons. Therefore, the free will of the other spouse must not be affected in any way.

We should not meddle “in God’s things

As much as they want to help a person, healers must not fall into this trap of interfering with someone else’s free will. This has its causes for several reasons: maybe it’s time for the marital union to fall apart. Perhaps the children from that marriage just came for those painful lessons to have divorced parents, a discordant family, and an environment to learn from.

There are many reasons why in this 3D level of ours, we should not meddle “in God’s things.” Luckily, the situation is resolved so that all the people involved are happy with the results. The situation starts to improve after day two, disputes are resolved without the person doing anything special about it.

How to help people in a coma?

People in a coma or with a severe psychiatric disorder are unable to give their willing consent to healing, so it comes from their closest. In the beginning, the so-called conversation with the soul of the person is performed, and only at that level the healer gets the green light for energy treatment or does not get it, even though the closest relatives have given permission.

Namely, if a person is in a coma, no matter what, maybe that is his way to “go”. If the healer finds out this during contact with that person’s soul, healing does not even begin. The free will of that soul must be respected here, regardless of what the relatives think about it. However, if a person is in a coma due to an operation and needs help to return, and it is not the first case already described, it is possible to return the person to a normal, conscious state.

How many energy healing treatments are needed?

For all of the above cases, the usual procedure is to scan first, but if the person knows their diagnosis, then a scan is not necessary. The first three treatments are performed, which in some cases are quite sufficient. If they are not, then a break of 5-6 days is recommended, and then three or more treatments are done, depending on the severity and age of the disease.

People are suffering from the most severe diseases, who require to be treated 20 consecutive days, which is very tiring for them. That is why the healer takes breaks between treatments so that the body and psyche can more easily absorb all the incredible amount of energy they have received, and thus get used to the changes gradually, not abruptly.

Reactions to the energy healing treatments

Improvements are usually noticeable after 24 hours, in some cases way shorter. Typically, the next day after the treatment, the person is in a better mood, calmer, but pain can also occur in places because of which the person came to the healer.

If it is a mental illness, the person may have even more explicit symptoms of the sickness the next day. When it comes to the surface, there is a “friction” and a collision of high healing energy frequencies and the extremely low frequencies of the illness itself.

The physical pain or a certain feeling like increased nervousness, sadness, or anger is an excellent opportunity to see what you are suffering from. However, such reactions may be absent, and the person is already starting to feel better, lighter, and more positive.

Namely, now everything comes to the surface, and you can see exactly which organs are diseased and what your mental and emotional state is. The important fact is that all these reactions disappear after a few hours or after day two, and the person then begins to feel better.

Energy healing does not only bring health but also resolves situations

There are improvements, the pain disappears, the diseased organs or psyche begin to rehabilitate very quickly, and the person as a whole feels much better. The client can function, go to work again, have normal communication with family members, gain new life joy, be more optimistic, cheerful, and open. People around notice these changes.

Many say that their lives have changed fundamentally because, in a few months, they also begin to resolve particular situations from everyday life that previously seemed unsolvable. By the very process of healing, a person changes both his life and timeline and solves specific problems without doing anything special.

These are the little “spells” that make it so nice to do all this and watch people get happier day by day, and that their specific life problems start to be solved one by one. 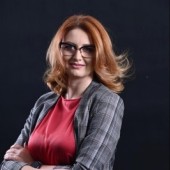 Elena is a Usui Reiki practitioner and freelance writer. She works with individuals, helping them align with their heart’s desires. She is dedicated to inspire and help others raise their vibration and find their life path.

Manage Anger and Turn It Into a Possibility for Change

Experience the Freedom of Forgiveness With This Healing Meditation

This website uses cookies to improve your experience while you navigate through the website. Out of these cookies, the cookies that are categorized as necessary are stored on your browser as they are essential for the working of basic functionalities of the website. We also use third-party cookies that help us analyze and understand how you use this website. These cookies will be stored in your browser only with your consent. You also have the option to opt-out of these cookies. But opting out of some of these cookies may have an effect on your browsing experience.
Necessary Always Enabled
Necessary cookies are absolutely essential for the website to function properly. This category only includes cookies that ensures basic functionalities and security features of the website. These cookies do not store any personal information.
Non-necessary
Any cookies that may not be particularly necessary for the website to function and is used specifically to collect user personal data via analytics, ads, other embedded contents are termed as non-necessary cookies. It is mandatory to procure user consent prior to running these cookies on your website.
SAVE & ACCEPT